This guide will show you How to use SCART to HDMI converter to use your old scart devices with your new TV. We have also compiled a list of the best scart to hdmi adapter according to their ranks.

Since 2003, HDMI has been one of the most popular interfaces for uncompressed audio and video transmission on devices like televisions, computer monitors, soundbars, and other digital audio/video devices. With every generation of revision, HDMI is becoming more and more capable of handling ultra high-resolution video and multi-channel audio streams with dozens of enhancements that need a lot of signal bandwidth.

Long before HDMI was standardized for consumer products, the SCART interface was quite popular in Europe and specific Asian markets for its composite/RGB video and bi-directional stereo audio input and output signaling.

It was implemented in almost all VCRs, DVD players, and set-top boxes of the previous era. Those who have owned a SEGA Dreamcast, Nintendo GameCube, Xbox/Xbox 360, or a PlayStation/PS2/PS3 probably are quite familiar with the SCART connector.

In case you want to take a trip down the memory lane and use your older SCART-compatible devices with your current-gen HDMI-compliant TV, then you can check out our selection of the best SCART to HDMI converters in the market. Most of them are pretty affordable too.

Complete List of the Best SCART to HDMI Converters

SCART to HDMI converters are some of the most popular AV accessories that are still mass-produced for hundreds of thousands of users out there. If you live in the United Kingdom or USA you can grab one from Amazon at a pretty low price. 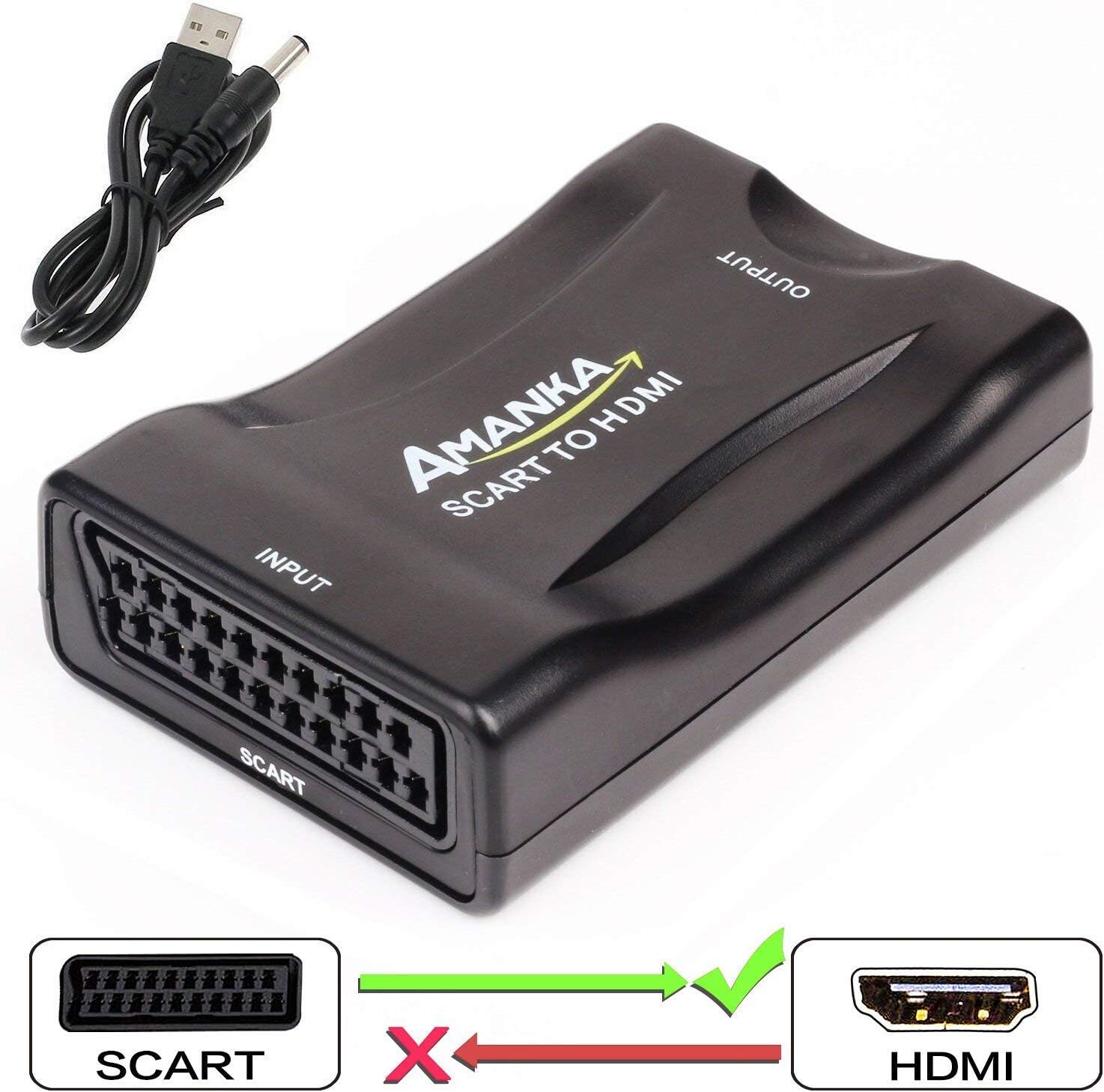 This particular SCART to HDMI Adapter from AMANKA is currently listed as Amazon’s Choice, and it has an excellent 4.5 out of 5 customer ratings. The adapter itself weighs approximately 45g, and it’s quite tiny in size.

For SCART input, you can connect set-top boxes, VCRs, DVD players, and retro game consoles, and many more.

You can manually switch between the resolution using the hardware toggle on the adapter. It can properly upscale the output from retro game consoles and make it sharper without hampering colors and texture details.

The AMANKA SCART to HDMI adapter is also plug-and-play and doesn’t require individual drivers or a first-time setup.

It comes with a 5V/1A USB to DC power adapter, with a max power consumption of only 3W. For clean home theatre setups, this adapter is small and stealthy enough to blend in behind TVs and soundbars. 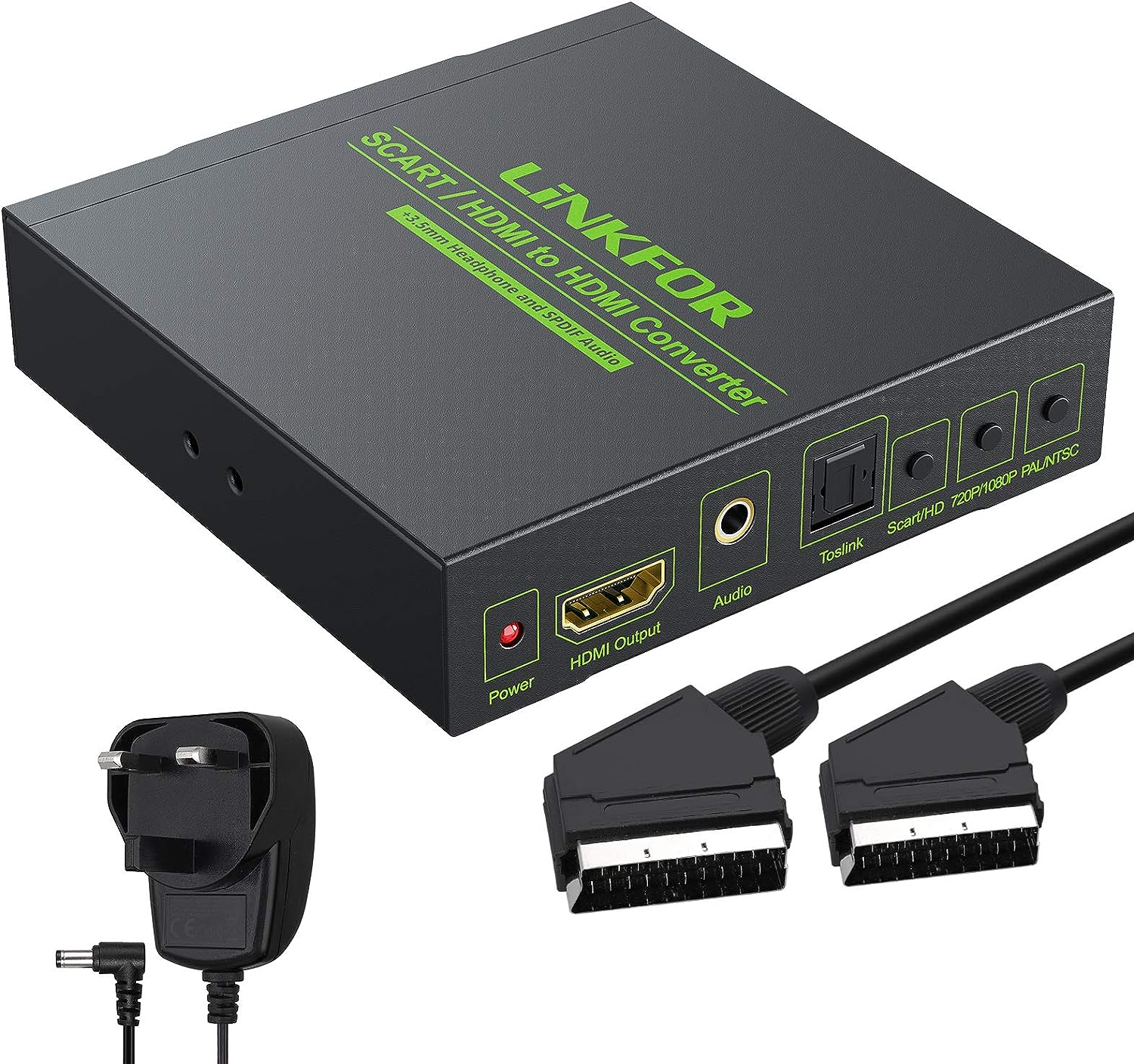 If you are looking for a SCART to HDMI converter to use with your old video game consoles and media players, this one from LiNKFOR is an excellent choice. It costs slightly more than the other converters on this list, but it also doubles as an HDMI extender hub.

This LiNKFOR unit is capable of converting both RGB (50/60Hz) and CVBS (PAL/NTSC) composite SCART signals to digital HDMI signals. It also automatically upscales the image for a full 1080p@60Hz or 720p@60Hz output on modern TVs.

This converter also separates the audio signals from the SCART source and makes them available over the 3.5mm analogue audio port and digital S/PDIF interface. It does the same when used as an HDMI extension hub, though it can only transmit 5.1ch audio over the TOSLINK port and not Dolby, DTS, or AC3 mix.

The LiNKFOR SCART to HDMI converter comes in a metal shell that not only helps to quickly dissipate heat but also eliminate external interference. Once again, it needs power from a 5V/1A source to function, for which a DC adapter is provided. 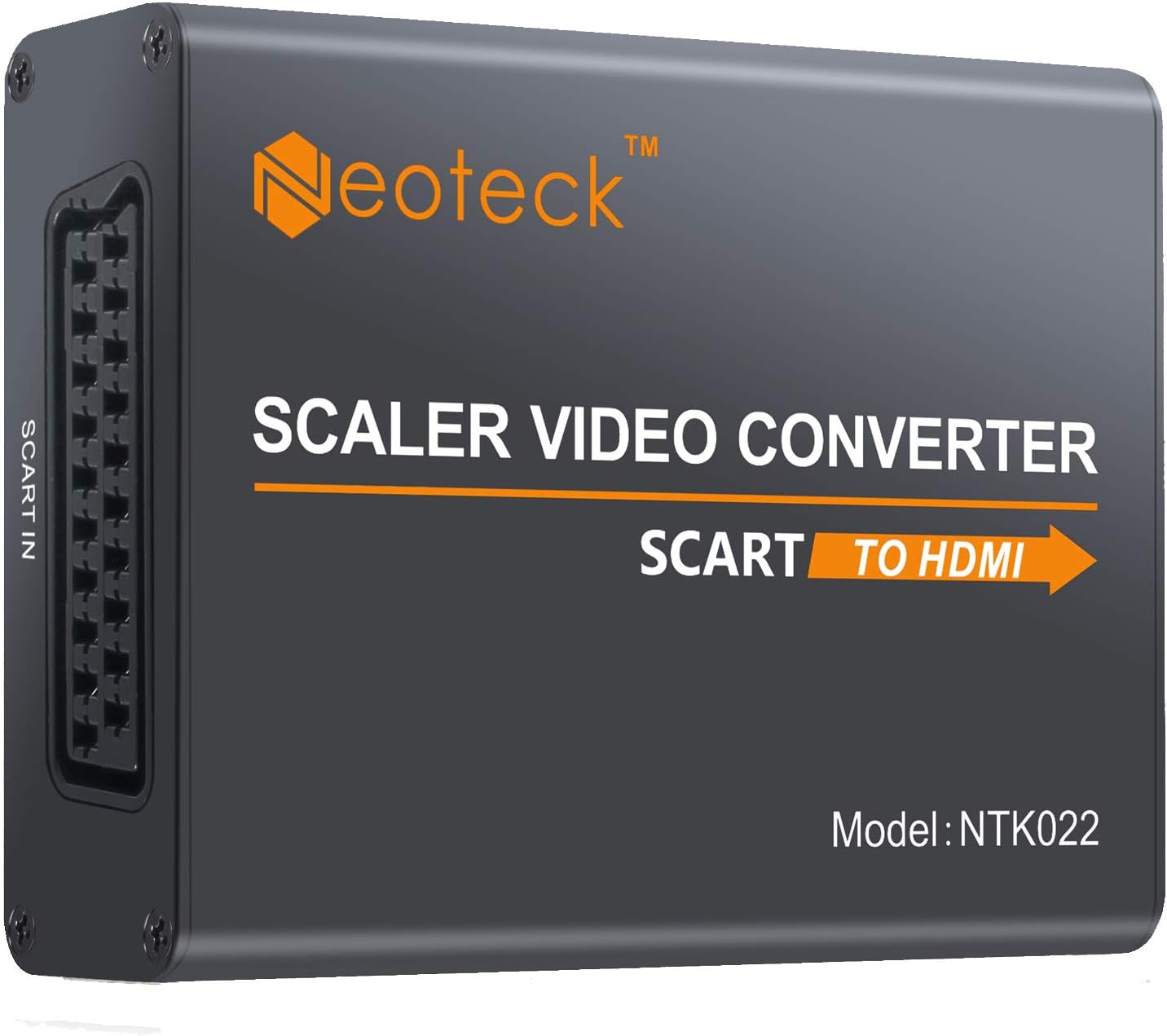 The Neoteck Aluminum SCART to HDMI converter can be set up easily, and its plug-and-play nature demands zero additional driver installations.

Unlike the ABS plastic used in the last two converters, this one from Neoteck has a metal casing, which ensures not only durability but also better heat resistance. The converter is also shipped with a 5V/1A power adapter with a barrel-shaped DC connector.

You can connect any device that comes with a SCART interface, whether it’s your old PlayStation, Xbox, Nintendo GameCube console or Blu-Ray DVD, and set-top box.

The converter can auto-detect the signals and convert them to 1080p by default, but you can also manually change the HDMI-out (1.3) to 720p. Both of the resolutions are accompanied by 50Hz and 60Hz refresh rates. It even has a 3.5mm audio-out for headphones, but it can also transmit FL/FR audio signals over the digital HDMI audio interface.

The only problem of this converter is the lack of RGB SCART input support. However, it does a great job of upscaling VCR content. In the UK, Neoteck also provides 18 months of warranty for the converter. 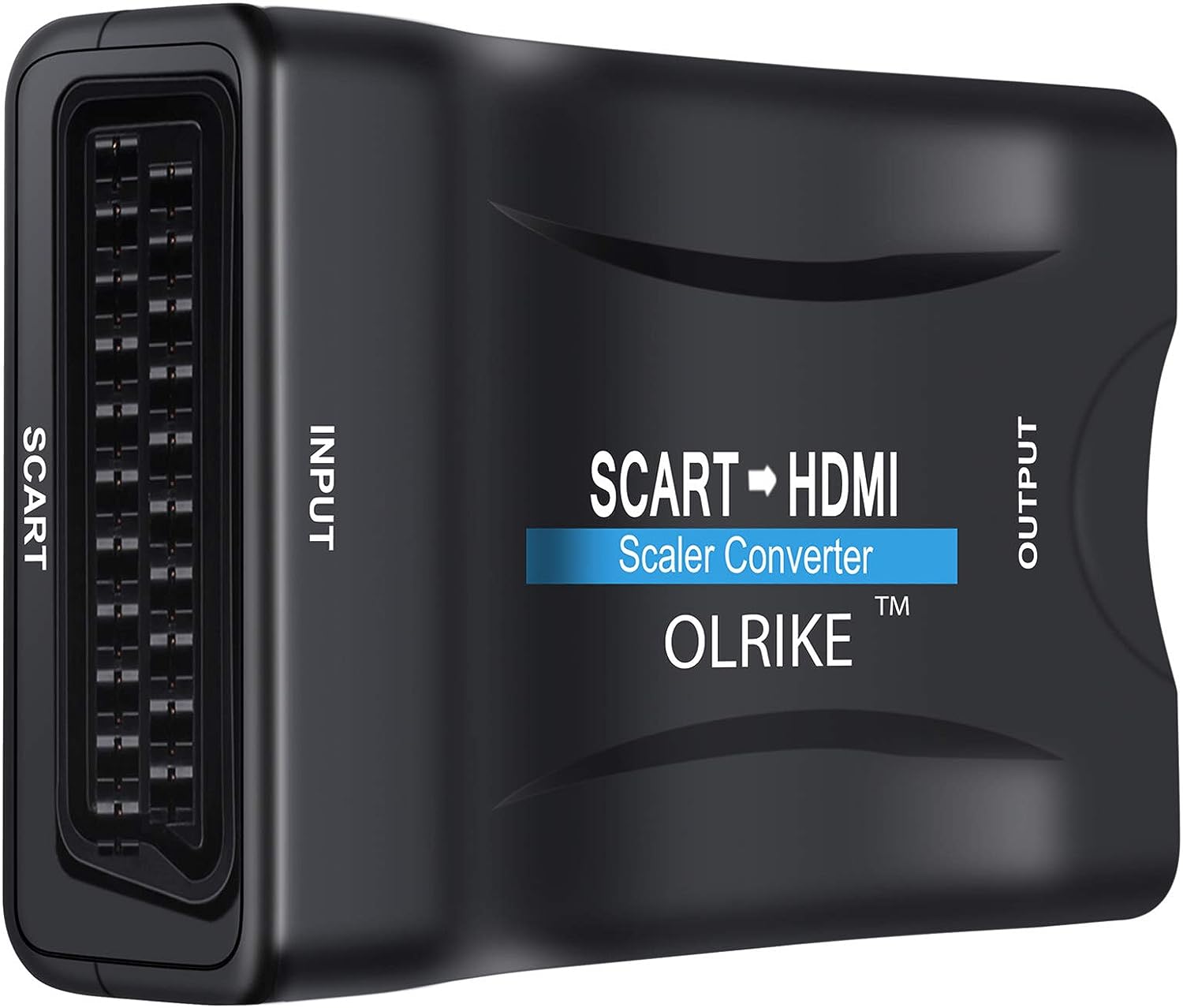 In case you are looking for an affordable SCART to HDMI converter, then the OLRIKE STH001 is recommended for you. It resembles the adapter from AMANKA in terms of design, and it also comes with a DC 5V/1A USB power cable.

Similar to every other SCART to HDMI converters in this list, it supports standard TV formats for its SCART input, including SECAM, PAL, PAL/M, PAL/N, NTSC4.43, NTSC4.58, etc. Its maximum HDMI 1.3 output resolution is 1080@60Hz, but you can also toggle it to 720p@60Hz using the hardware switch.

It only supports composite video signals. The OLRIKE STH001 works out of the box, with no manual configuration required.

Make sure to use a USB port that can deliver at least 5V of power to the converter. Otherwise, it won’t work correctly. The converter is also covered by 12 months of manufacturer warranty. 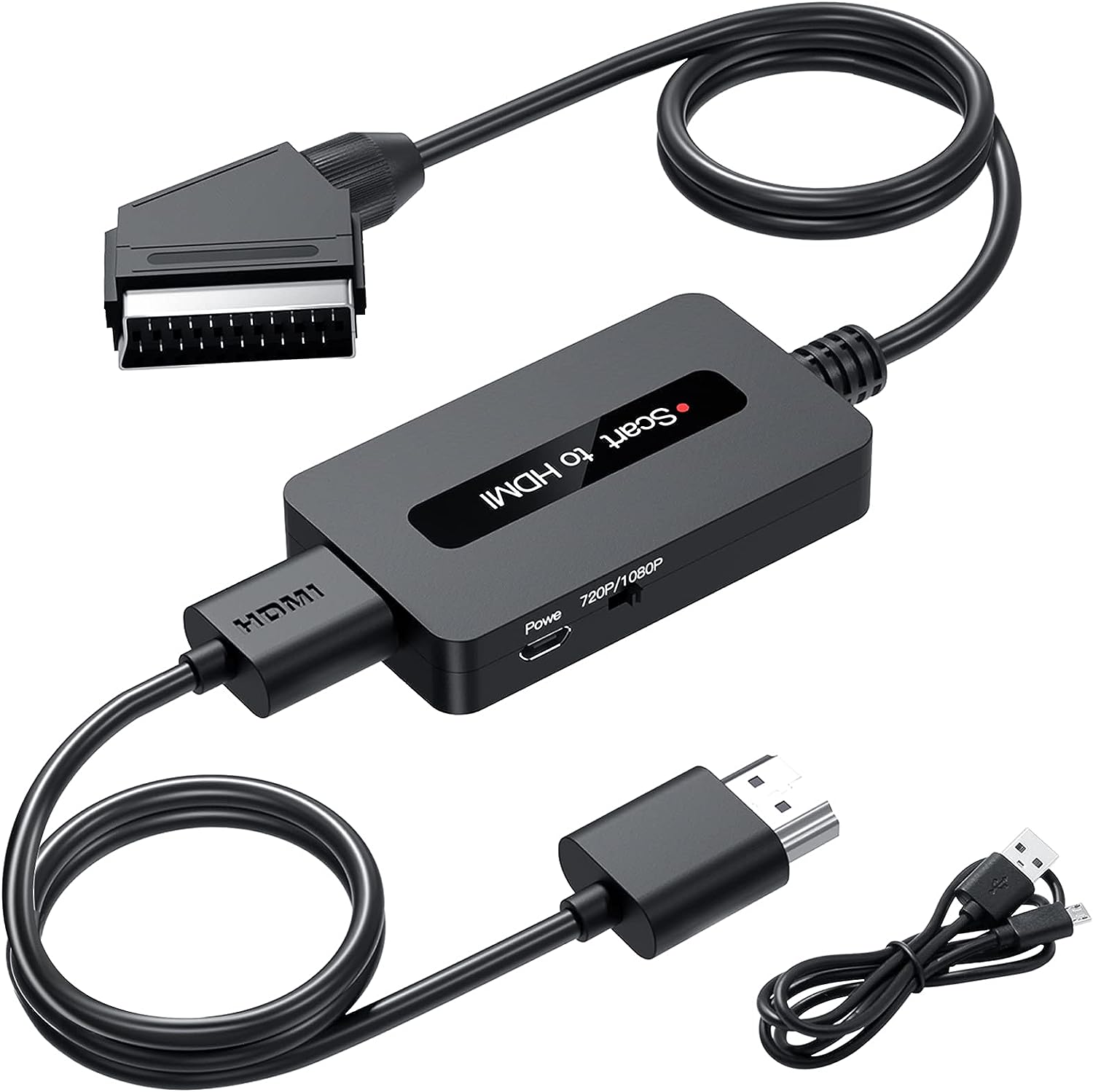 The Kirolle SCART to HDMI converter is reasonably affordable and easy to set up. It features an advanced signal processor that converts the analogue SCART signals without affecting the details and colors or any sort of picture degradation. The chip is also capable of upscaling the conversion to 1080p resolution.

The good news is that the Kirolle SCART to HDMI converter works perfectly with older set-top boxes, DVD players, and older game consoles. However, the male SCART connector on the converter means you will require an additional female-to-female adapter to use with the OG Xbox, Nintendo 64, and PlayStation 2 consoles.

This is an active converter, so it draws power from an external source via the 5V MicroUSB port. Unlike the non-detachable SCART cable on the unit, you can swap the 1.2m HDMI cord for your preferred cable. It’s worth mentioning that this particular SCART to HDMI converter doesn’t work the other way around.

Kirolle offers a one-year warranty for the converter in case it stops working. 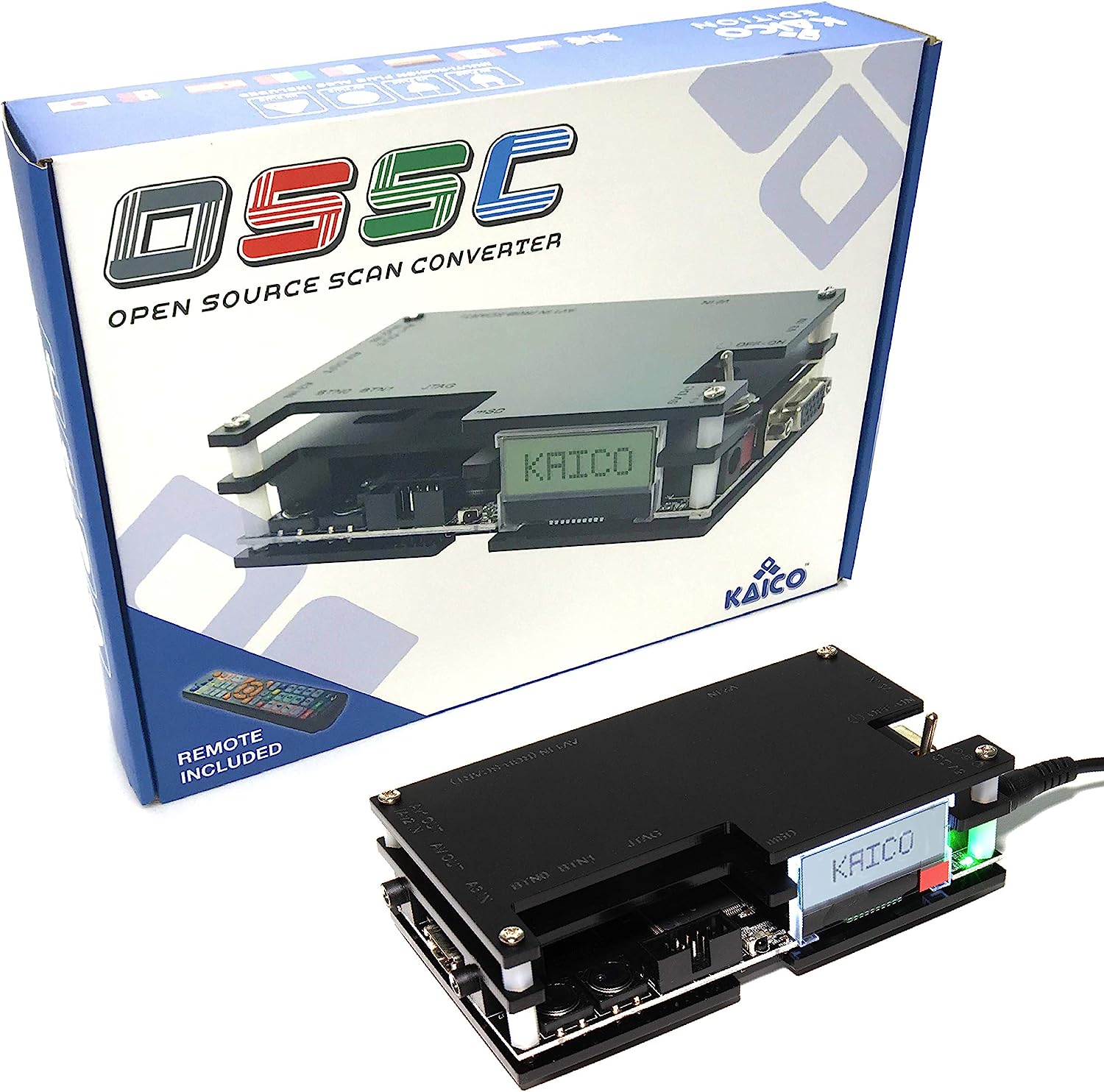 If you are willing to put some money and effort to relive your retro games as they are meant to be, the Kaico open-source scan converter is a worthwhile investment.

The OSSC uses FGPA technology, which allows for the best possible conversion of legacy video signals from a retro console to an HDMI signal for conventional TVs. It features SCART and Component Video inputs that support RGsB and YPbPr signals, along with a single VGA input. All inputs are compatible with up to 288p and 576i sources.

As for outputs, the converter only has an HDMI port, but it also works with DVI-D over an adapter. You get a full 24-bit RGB output over both interfaces. Supported output resolutions include 480p, 576p, 720p, and 1080i (interlaced).

The Kaico OSSC offers an on-screen display setting menu, letting users tweak the output to their liking. Other features of the OSSC include a backlit LCD screen and JTAG connector for debugging purposes, as well as an SD card slot for firmware updates. You also get a functional IR remote controller and a multi-plug power adapter in the box.

From the Atari Jaguar, Commodore, Amiga, SNES, Sega Saturn, Genesis, Gamecube (PAL version) to the Sega Dreamcast, Nintendo Wii, PS1, PS2, and more, the Kaico OSSC works flawlessly with most retro consoles out there. That said, it’s incompatible with the Nintendo 64 and the original NES as the converter doesn’t support S-Video.

If you want your retro arcade games to look their best and feel nearly instantaneous on a modern flat-panel TV, the Kaico OSSC is the way to go. However, it certainly isn’t a plug-and-play solution and requires plenty of adjustments in order to work with your retro consoles as intended. 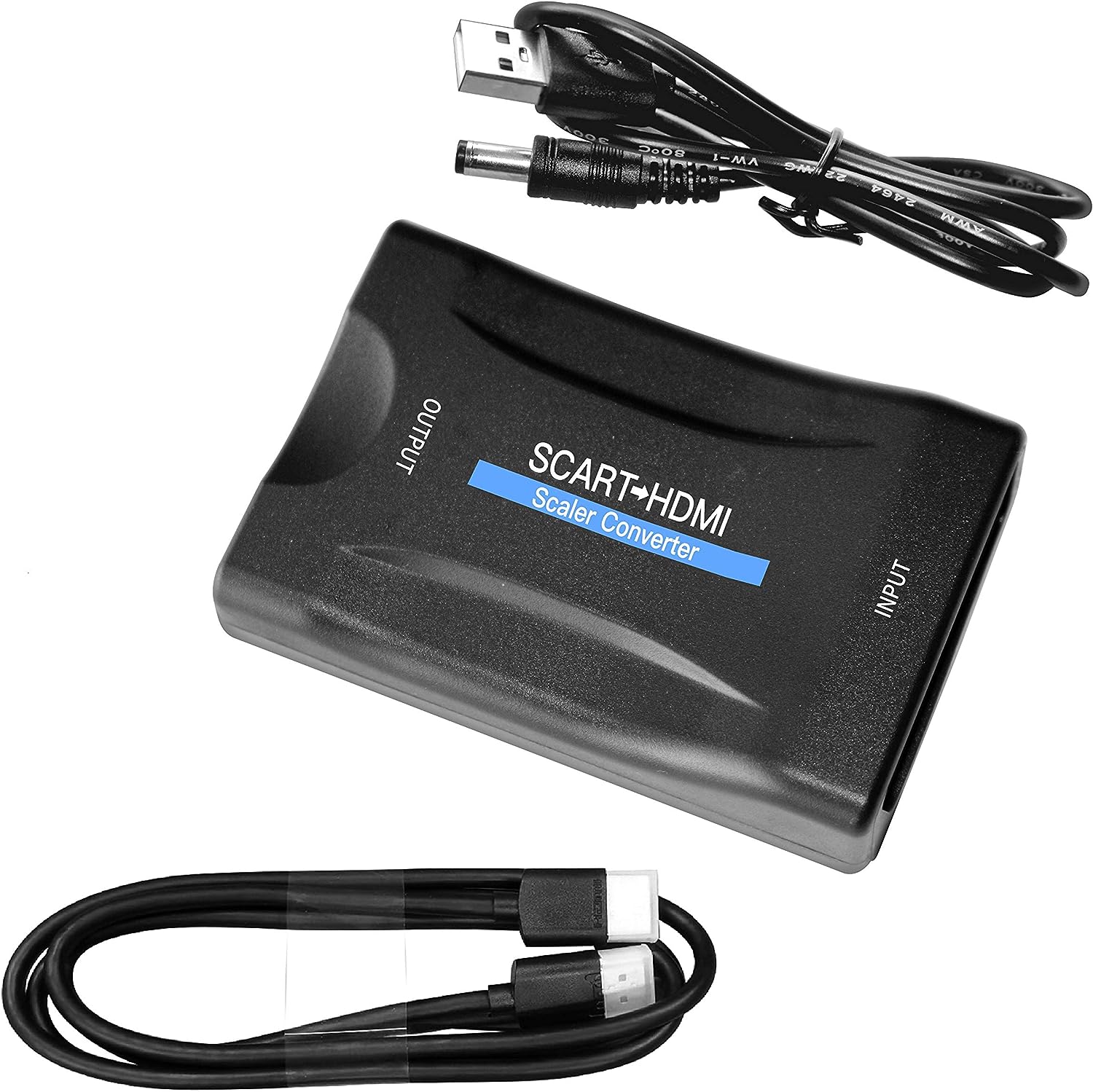 Those who are searching for a plug-and-play SCART to HDMI converter will find this unit from KUYiA appealing. It’s compatible with most devices with a SCART output interface, including older set-top boxes, DVD players, VCRs, and retro consoles.

The supported SCART input formats include PAL-M, PAL-N, NTSC3.58, NTSC4.43, SECAM, etc. The built-in transcoder chip converts the analogue SCART signals and makes them compatible with the HDMI interface. The converter doesn’t degrade the signal quality or add too much latency.

To account for modern flat-panel displays, the KUYiA SCART to HDMI converter upscales the SCART source to either 720p or 1080p without oversharpening the output or losing details. You can select between HD and Full HD HDMI output by toggling the physical slider on the converter unit.

All of this processing is hardware-based, so it’s ready to work with your devices. However, you must use high-quality SCART and HDMI cables to get the best conversion results. The only thing you have to do is connect the HDMI to SCART converter to a USB power source using the supplied USB to DC cable, and it will start working immediately.

What are the Cons of Converting SCART Signals to HDMI?

SCART and HDMI function quite differently, considering that there are decades of technological advancements in the release of both video interfaces. Hence, you need to learn about the shortcomings associated with converting SCART signals to HDMI.

While SCART is capable of simultaneously carrying both video and audio signals, the video quality is limited to 560p, and you only get mono/stereo audio.

The last iterations of SCART supported high-definition video signals and multi-channel audio streams over YPbPr connections. Still, it wasn’t a standardized solution due to the limitations of the SCART interface.

When you convert a SCART resolution to either 720p or 1080p, it basically stretches or crops into the image to fill your TV’s 16:9 resolution. Although the image processing does add extra enhancements to make the picture look sharper, the results come out with fewer details in the process.

A cheap SCART to HDMI converter will make it worse, and it will struggle to process the audio signals.

1. How do I use the SCART to HDMI converter?

All you need is to connect your SCART-compatible device to the SCART input of the converter, then connect the HDMI-out to one of the HDMI-ins of your TV with the necessary cables.

Most of these converters are plug-and-play solutions, so it should start working as soon as you connect the converter to its respectable power source.

2. What devices can I connect to my TV using a SCART to HDMI converter?

As previously mentioned, you can connect any of your SCART-compatible devices to your modern TV using a SCART to HDMI converter, whether it’s a cable box, VHS player, DVD player, or older Sony PlayStation/Microsoft Xbox/Nintendo game consoles.

However, be sure to check out the list of compatible devices on the product page before ordering your preferred SCART to HDMI converter.

3. Should I buy a SCART to HDMI Cable instead?

SCART to HDMI cables do exist, but they aren’t as reliable as converters that come with dedicated image signal processors. You also lose upscaling and forced to letter-box resolutions, which don’t fill up your TV screen.

Also, make sure to leave your feedback and experiences with the mentioned SCART to HDMI converters in the comments below, so that we can cover more guides like this in the near future. 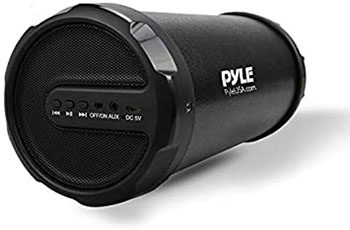 Grab the best controller for Rocket League on PC when …