Acer ED323QUR Review: When it comes to monitors, Acer isn’t the first company that comes to mind. It’s more popular in the consumer market for its gaming laptops, pre-built desktops, and accessories. However, Acer has been in the display business for many years, releasing value-oriented and high-end monitors under its Nitro and Predator lineup. Some of them are worth considering should you be on the hunt for a new gaming monitor.

The ED323QUR is one of Acer’s most popular gaming monitors, with thousands of positive customer ratings. It’s a 32-inch display with a 1440p curved VA panel, and it refreshes at 144 Hz. Released back in 2018, you can still find it online at discounted prices. Those looking for an immersive, high refresh rate gaming experience on a budget should find this particular model attractive, considering it’s also fairly large. 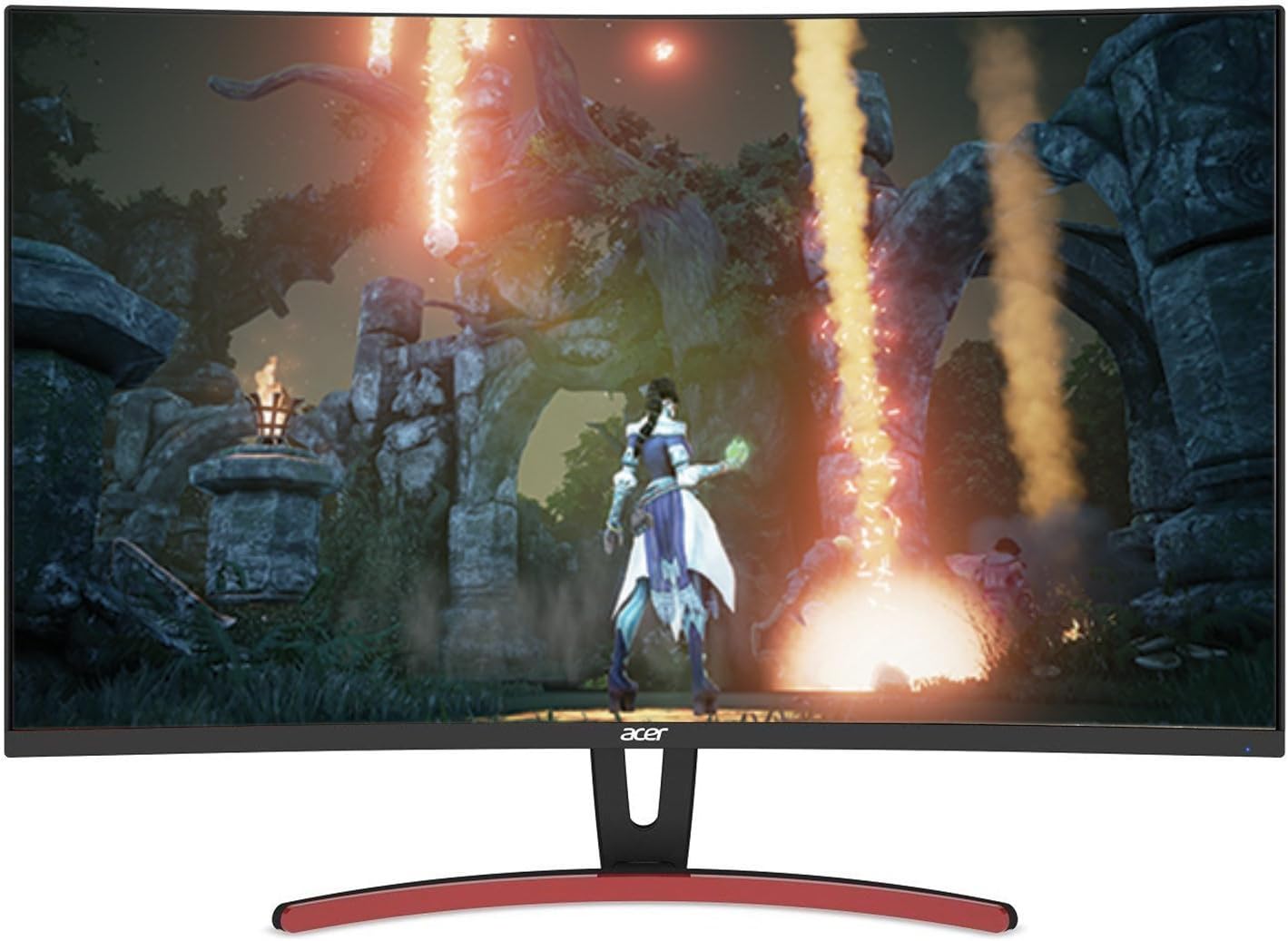 There aren’t many in-depth reviews of the Acer ED323QUR monitor, so we decided to take the matter into our own hands. Our comprehensive Acer ED323QUR review will tell you pretty much everything you need to know, including its features, design, and panel performance. It’s so that you can make a proper purchase decision.

At the time of writing, you can buy the Acer ED323QUR gaming monitor from popular e-commerce websites like Amazon. It’s worth noting that there are similarly priced options from Asus, AOC, LG, MSI, Samsung, and ViewSonic, but we won’t go into much detail comparing them to the Acer model in this review.

Another important thing to note is that this review focuses on the Acer ED323QUR “Abidpx” and not the “widpx” variant. The latter is also a 32-inch 1440p monitor, but it’s only 75 Hz and lacks Radeon FreeSync support.

There’s nothing really striking about the Acer ED323QUR’s design except the large display on the front, which has a 1800R curvature. Although it’s mostly considered a marketing gimmick for gaming monitors, we think the subtle curve on the 31.5-inch panel helps with perspective distortion, which can be a problem with larger flat panels.

In addition, the monitor has surprisingly thin top and side bezels, except for the thicker bottom bezel with the centered “Acer” logo. The frameless design accentuates the screen real estate and minimizes distractions. For multi-monitor setups, the minimal black borders on both sides of the monitor offer a seamless experience.

The back of the ED323QUR is also nothing extraordinary. It’s entirely made of matte black plastic, with a prominent “Acer” branding on the top corner. There are no distinct, edgy design elements or pointless RGB lighting strips on the monitor unit except the front red plastic strip on the included stand. We consider the Acer ED323QUR a suitable choice for every kind of PC setup aesthetics.

The bottom-right corner of the back panel is where you will find the control nub for user-friendly OSD navigation. It’s far better than dealing with multiple buttons, especially in the dark. Fortunately, users can also play with the various on-screen display settings via the Acer Display Widget software.

The stand included with the ED323QUR is low-profile and doesn’t occupy much desk space. However, it’s very limited in terms of adjustability. You only get -5°/15° tilt motion, with no swivel, pivot, or height adjustments. That said, the monitor has 100 x 100 mm VESA mounting holes, so you can install it on a compatible third-party stand or arm if you want higher adjustability.

Overall, our unit is blemish-free with no visible build quality defects (e.g., scratches, cracks, separations) out of the box. The included stand is also fairly sturdy and wobble-free, even though there’s a large incision in between for routing the display cables.

The Acer ED323QUR is quite basic in terms of connectivity. You get an HDMI 2.0 and a DisplayPort 1.2 port, along with a legacy DVI-D port for receiving video signals from older graphics cards and media devices. There is no USB hub present on this unit for peripheral connections, unlike some of the latest gaming monitors.

Unfortunately, the ED323QUR offers a 3.5 mm audio jack for connecting headphones or speakers. It lacks built-in speakers, but at least has the option to connect your audio devices directly to the monitor. The omission of stereo speakers isn’t a big deal, but a separate set of speaker towers will occupy more desk space. 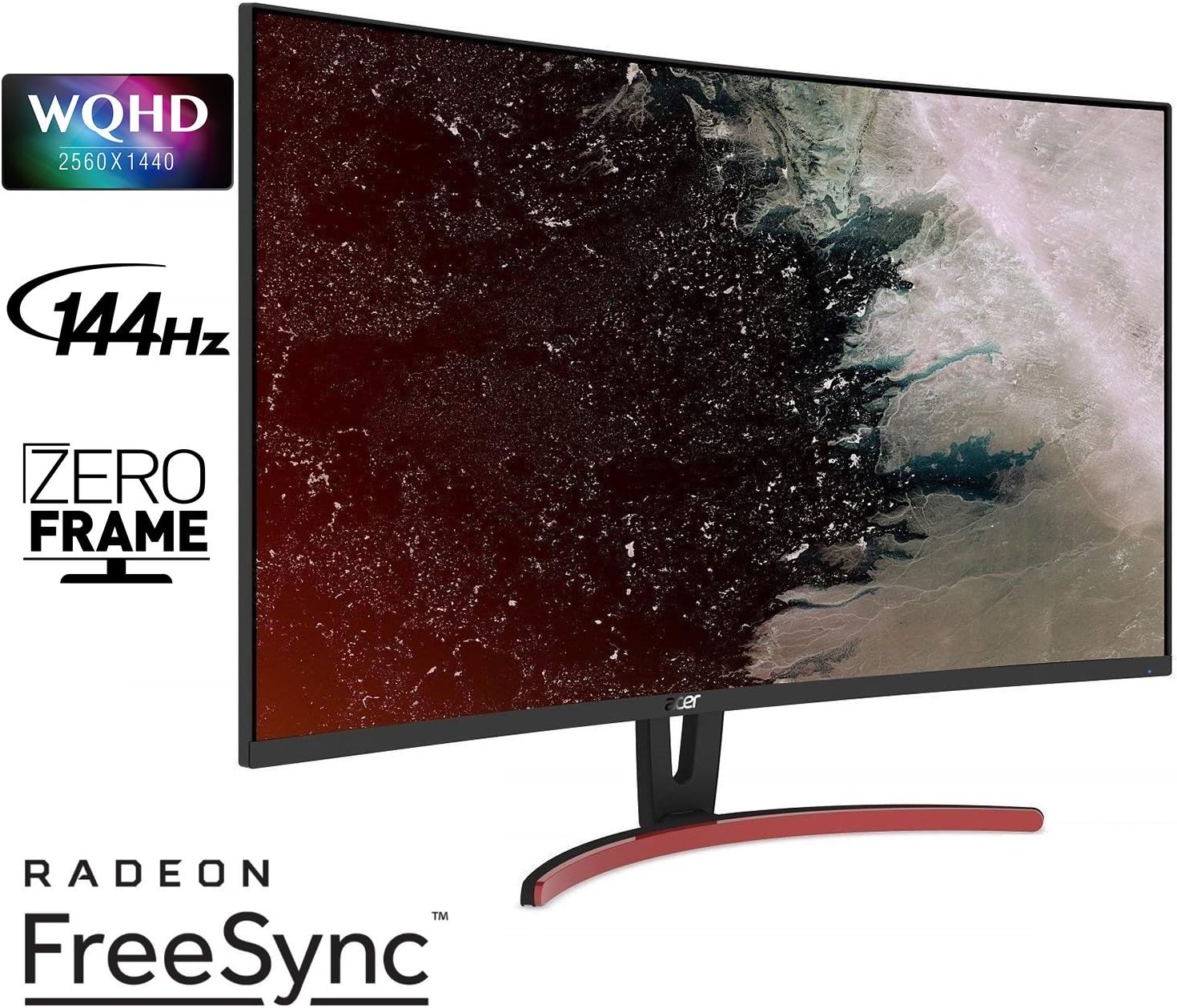 The Acer ED323QUR Abidpx features a 31.5-inch 8-bit VA panel. It has a 2560 x 1440 resolution, 144 Hz refresh rate, and a 4 ms gray to gray pixel response time. The brightness maxes out at 250 nits, and it has a typical contrast ratio of 3000:1. The panel doesn’t support HDR (High Dynamic Range) or meet VESA’s minimum requirements for the feature.

The pixel density is 93 PPI, not particularly groundbreaking for a large 32” display format. However, it still produces clear texts and crisp images with no visible blurring. The viewing angles are also okay, though IPS panels are still superior in that regard.

We measured a maximum brightness of 310 nits on our Acer ED323QUR, which is way past the value on the official specification sheet. On 100% brightness, the screen should be visible in a moderately lit room, but it may not hold up under brighter conditions. With that said, the matte anti-glare coating on the screen does help reduce reflections.

It’s pretty standard for a VA panel to have a better contrast ratio than IPS panels, and the ED323QUR is no exception. From our tests, we found the advertised 3000:1 contrast ratio to be precise, with slight deviations depending on the brightness level. The panel produces brighter whites and deeper blacks, adding more depth to the scenes. In contrast, the black levels on IPS panels are always slightly grayed out.

VA panels are not known for their color accuracy, yet the Acer ED323QUR does a great job. On its out-of-the-box profile, the panel covers nearly 98% of the sRGB, 80% of the Adobe RGB, and 86% of the DCI-P3 color gamut. The default color temperature is set to warm, but you can simply tone down the reddish highlights from the OSD menu.

The average ΔE value is slightly on the higher side, but it doesn’t affect gaming by any means. However, if you plan to do professional creative work, you may need to use a colorimeter to achieve a lesser Delta E value and more color accuracy.

Then again, if you are into photo and video editing, you won’t be choosing this monitor in the first place. Instead, you should look out for IPS monitors that come with factory calibration. We highly recommend the BenQ PD2700Q for that sort of work.

VA panels generally offer better panel uniformity than IPS, but not all of them. Luckily, the Acer ED323QUR has pretty decent black uniformity, with very minimal backlight bleed overall.

Gray uniformity is also excellent, even though the edges of the display are slightly darker. It doesn’t have the same dirty screen effect as some IPS panels. All in all, the ED323QUR does a good job of displaying near-dark scenes.

The Acer ED323QUR has an impressive 4 ms gray to gray response time at its maximum refresh rate of 144 Hz. The motion looks very smooth, with almost no visible blur. In our ghosting tests, it performed exceptionally well for a VA panel.

We highly recommend using the “Normal” Overdrive setting because it has much less overshoot than the “Extreme” setting. After all, you wouldn’t perform the best in your favorite eSports titles with severe inverse ghosting issues.

The Acer ED323QUR natively supports AMD’s Radeon FreeSync technology. For those who don’t know, the feature allows the monitor to dynamically match its refresh rate to the frame rates your graphics card can produce in a game. It eliminates the annoying screen tearing effect when running games below the monitor’s target refresh rate.

It’s worth noting that the FreeSync range of the ED323QUR is between 48 Hz and 144 Hz. We also got the monitor to work with NVIDIA G-Sync over the DisplayPort connection.

However, don’t confuse it with full-blown G-Sync Ultimate monitors that come with a proprietary hardware module. “G-Sync Compatible” monitors like this only use VESA’s Adaptive-Sync technology.

Final thoughts on the Acer ED323QUR

The Acer ED323QUR Abidpx is a gaming monitor that surprisingly checks a lot of boxes, offering a large frameless 32” screen, a native 144 Hz refresh rate, and VRR support. The 4 ms GtG response time is nothing to write home about, but it’s impressive for a mid-range VA panel nonetheless.

Granted, the subpar viewing angles make the monitor less ideal for co-op gaming and movie watching. Plus, the default color profile is certainly not the best for media creation. Some people may not like the slight 1800R curve as well.

With all that said, we would still recommend the Acer ED323QUR for gaming and multimedia purposes solely because of its attractive price tag. It’s one of the only 32” 1440p monitors on the market that doesn’t cost a fortune, yet it delivers an all-rounder performance.

If you have any queries regarding this Acer ED323QUR review, let us know in the comments below. Please have some patience as we answer all your questions one by one. Also, be sure to check out the following pros and cons chart for a summary. Here, in this article of ours, we have compiled a … Struggling to find the Best Mini Fridge for Gamers? Browse …