In this iphone Projector article we have reviewed top 5 best mini projectors for iphone with pros and cons. Read on to learn more.

The best mini projectors can offer a large and clear picture anywhere you need, whether it’s a small apartment, a hotel room, or inside a camping tent. By definition, they are meant to be compact, lightweight, and portable. Rather than limiting yourself to just one small fixed screen, mini projectors allow you to cast an image of a size bigger than conventional TV screens onto any plain surface.

While they deliver nowhere near the luminance and sharpness you’d expect from a bulkier unit, modern mini projectors offer surprisingly good projection quality for office presentations and those impromptu movie parties. Some even have a battery built-in, so you can use them simply untethered for a few hours.

If you are in search of the best mini projectors for iPhone or iPad, this guide is for you. After scouring through Amazon UK, we have sorted out the top selections in the list below. It will help you choose the best iPhone projector based on your needs.

Amazon lists an abundance of mini projectors, but our picks feature only the best of the best options. You can use them with not only your iPhone but also other devices if you want to. A few mini projectors on the following list also have streaming apps built-in, meaning you won’t even have to carry a separate source device. How convenient!

Apart from offering a brief overview of every mini iPhone projector on this list, we have also discussed its pros and cons so that you are well-aware of what you are purchasing. 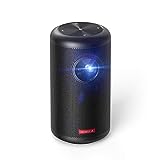 Since you want a mini projector, portability should be one of your key considerations. And when considering portability, it should be at least the size of a soda can to fit in most backpacks, just like the Anker Nebula Capsule II.

The Nebula Capsule II has everything you need, from onboard Android TV with Chromecast to a built-in 8W speaker that projects 270° room-filling audio. All it requires is an internet connection over Wi-Fi, and you are ready to stream from your favourite live and on-demand services.

Despite its size, the DLP chip inside this cutting-edge mini projector is capable of projecting a crisp 720p picture at up to 200 ANSI lumens. It even has autofocus and keystone correction that provides a flat projection regardless of where you put the unit.

The Capsule II does have an HDMI port, so you can connect your iPhone to it using a Lightning to HDMI adapter. Alternatively, you can mirror* your iPhone screen or cast content from supported apps wirelessly to the projector.

Other connectivity options include a Type-A USB port for playing media files and presenting documents directly off a flash drive and a 3.5mm AUX jack for connecting headphones or speakers. You can also use the Capsule II as a Bluetooth speaker.

The built-in battery provides three hours of video playtime and up to thirty hours of music playback. The included PD brick fully charges the projector in just 2.5 hours.

We like the Anker Nebula Capsule II for its portability and versatility, and you will too. Sure it ain’t cheap, but consider it as a long-term investment for those backyard binges and camping cinema nights.

*The Nebula Capsule II doesn’t have AirPlay, though screen mirroring from iPhone/iPad works flawlessly once you install AirPin from the Nebula Manager app on the projector. Casting, on the other hand, works out the box.

2. ViewSonic M1 mini Plus: Projector that fits in your pocket 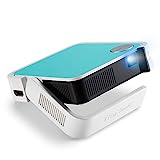 Keeping in line with portability in mind comes the M1 mini Plus projector from ViewSonic. Its form factor reminds us of portable CD players of the 90s, but it does more than just play music.

The key selling point of this projector is its pocketable design. It has a clever retractable stand that not only offers flexible projection angles but also doubles as a lens cover. The coloured top cover plate is swappable, with two additional plates included in the box.

The least impressive aspects of this mini DLP projector are its 480p resolution and 50 ANSI lumens ratings. However, it still offers a decent projection in a dimly lit environment– the darker the better. The auto vertical keystone correction helps with the projection’s alignment.

The built-in 2W JBL-tuned speaker, though slightly tinny-sounding, is perfectly okay for casual watching. As for outputs, you can connect your iPhone to the only HDMI port using an adapter. It’s also worth highlighting the Type-A USB 2.0 port, Wi-Fi, Bluetooth 4.2 connectivity.

The M1 mini Plus runs a heavily modified version of Android with the Aptoide app store built-in. You can download your favourite streaming apps on the projector and stream content via Wi-Fi if you want to. The screen mirroring feature works with both iOS and Android devices.

On battery power, you can expect up to 1.5 hours of video playback from this mini projector. The included USB-C power adapter tops up the 5000mAh battery at a reasonably fast speed. Alternatively, you can keep the unit connected to a power bank for extended playtime.

The ViewSonic M1 mini Plus is also fairly priced considering its extremely portable form factor and Wi-Fi connectivity. We can easily recommend it to frequent travellers, campers, hikers, or anyone who want to carry around a portable iPhone projector.

If you don’t need the smart capabilities, get the M1 mini instead. It will run you significantly cheaper than the Plus version.

The Elephas W13 is the top-rated mini iphone projector under £100 on Amazon UK, and it’s also the most affordable option on this list. Although it isn’t as portable as the ViewSonic unit, it has relatively compact dimensions and doesn’t weigh much, so you can still carry it around.

Don’t be fooled by the price tag, as the Elephas W13 still features Wi-Fi connectivity. Thus, you can either mirror your iPhone’s screen wirelessly to the projector or connect it to the HDMI port using Apple’s Lightning Digital AV Adapter.

While we have our suspicions about the 250 ANSI lumens rating, the projection from the W13 looks relatively bright in a room with very little ambient light around. The HDMI input takes up to a 1080p video signal and downscales it to the native resolution, resulting in an overall detailed image despite being 480p.

The built-in stereo speakers do the job, but you can connect your pair of headphones or speakers via the 3.5mm AUX port. Other connection interfaces include VGA, AV, USB Type-A ports, and a MicroSD card slot. This sort of versatile I/O is ideal for office environments.

Some of its drawbacks include limited angle adjustability, missing auto-keystone/focus correction, and no built-in battery. That said, the Elephas W13 is still an excellent option if you are looking for a portable projector for iPhone on a budget. 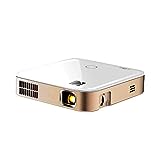 The Kodak Luma 350 shares the same footprint as the ViewSonic M1 mini, but the former sits at a slightly higher price with better specs. This mini projector has a simple yet elegant design, and its compact body easily fits into an outstretched palm.

Like the M1 mini Plus, the Luma 350 runs a custom version of Android with the Aptoide app store built-in. It also comes preloaded with a few common streaming apps like Netflix, Prime Video, YouTube, etc. If you are looking for a Bluetooth projector for iPhone then Kodak Luma 350 is the best choice. You can mirror your iPhone screen over AirPlay and Android screen over Miracast to this Kodak mini projector.

Besides Wi-Fi and Bluetooth connectivity, the Luma 350 features HDMI and USB inputs. The built-in 3W stereo speaker pair offers serviceable audio quality, though you can also plug in your headphones or speakers to the 3.5mm auxiliary output.

This single-chip DLP projector has a modest resolution of 854 x 480 and is rated for 200 ANSI lumens of brightness. In a dark room, the projection can go up to 60 inches without noticeable degradation, but the optimal size is about 48 inches, according to Kodak.

The 7500mAh battery inside the Luma 350 last more than two hours of video playback and takes nearly four hours to fully charge. You can keep the DC adapter plugged into the projector for continuous play.

If you can slightly widen your budget, the Kodak Luma 350 is the better alternative to the ViewSonic M1 mini Plus, which we also recommended before. It’s one of the best mini projectors for iPhone that we have come across in this particular price segment. 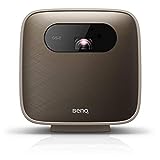 The BenQ GS2 is an impressive projector for its size. It’s a cube-shaped unit with a premium exterior finish, chamfered edges, a tilt-adjustable base, and IPX2 certification. The overall design screams solid craftsmanship, but it also packs very capable hardware.

The BenQ GS2 is equipped with a single 1280 x 720px DLP chip, rated for up to 500 ANSI lumens of brightness and 98% of Rec.709 colour space coverage. It automatically downscales a 1080p video source to the native res, providing a clean and detailed projection with a softer focus.

It even has auto-focus and auto-keystone correction, so you won’t have to fiddle with the projection to get the best picture. The onboard stereo speakers also deliver admirably good audio performance, and you can connect a pair of wireless headphones or a portable speaker unit via Bluetooth.

In terms of wired connectivity, the GS2 has a single HDMI 1.4 port, two USB (Type-A + Type-C) slots, and a 3.5mm audio-out jack. The Type-C USB port works as both a display input and a reader for flash storage devices. The included Wi-Fi dongle enables screen mirroring, along with native Chromecast and AirPlay support.

The GS2 runs BenQ’s modified version of Android 6.0 with the Aptoide TV app store built-in, meaning you stream online content directly off the projector. That said, the older Android version does limit your app choices to an extent.

Overall, the BenQ GS2 checks almost all the boxes, but it also comes at a steep price. You can expect up to three hours of runtime on battery, though we recommend connecting the magnetic AC power cord whenever possible to get the best image quality.

And with that, we finish up this guide to the best mini projectors for iPhone. Those who are interested in buying one of these portable projectors should find our Amazon UK links useful.

If you think we should come up with more guides like this, feel free to let us know in the comments. We also recommend taking a look at our other projector-related article while you are here. 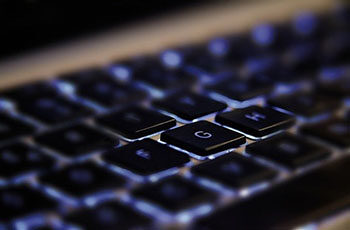 In this article, we have reviewed the top 6 Best … 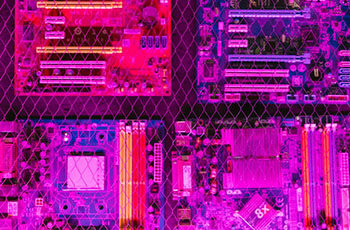 In this article, we have compiled a list of the …